The Story of the Sword - Part 3 - The Iron and Steel 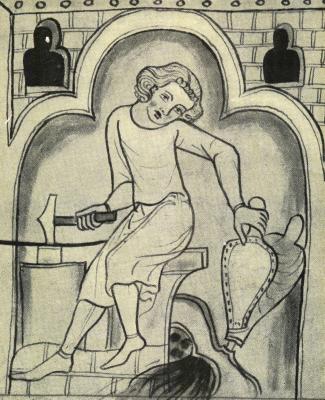 The Iron and Steel

The Iron and Steel

There is a comprehensive scientific literature on how the blacksmiths of Early Middle Ages processed iron to make swords. The manufacturing techniques are more or less well known.

Each sword consists of several basic parts. A blade, the “working “part of a weapon, is ended by a point and surrounded by sharp edges on both sides. The middle part of a blade bears a fuller which can be seen on a significant proportion of the length of the blade. The fuller is a rounded or beveled groove or slot in the flat side of a blade that is made by using a blacksmithing tool called a spring swage. These grooves are very often called "blood grooves" or "blood gutters", however their purpose was more to make the sword lighter than to drain the live-giving liquid out of the adversary´s body. The blade continues by a tang with a guard put on. The guard served as a protection for the keeper´s hand against the adversary´s attack and made the grip firm and safe. The tang ended by a pommel which was meant to be a counterbalance of the blade. A hilt between a guard and a pommel was wrapped by an appropriate material. Usually, skin, wood, bones and many other even more decorative materials were used.

A sword was a weapon in the first place, thus a tool for an effective elimination of an enemy. Its construction and use of an adequate material had to respond to a sword´s primary function. The weapon had to be shock-proof, maintain its sharpness and remain sufficiently flexible. It had to stand the enemy´s arms and armour and knock the adversary out of the combat. These characteristics of a sword could be achieved by a combination of material: iron and steel (iron alloyed with carbon).

When manufacturing the blade of our sword, they used one of the ways how to achieve the demanded characteristics. On the basis of the blade made of a softer iron, edges made of steel highly alloyed with carbon are forged together and the whole piece was quenched. The resulting forged piece was shock-proof, flexible and it was possible to keep the weapon sharp. This significantly complex construction required blacksmith´s dexterity and his sense for temperature which was measured only by his personal experience and a visual assessment of a tone of the incandescent metal. Nevertheless, even though there were hardly understandable “primitive” conditions for us at the process of making items so highly precise and specific in their use, there were weapons of a high quality made in the Early Middle Ages. They were completely sufficient for the way of fighting of those times.

The guard and the pommel were not as demanding for quality of the basic material. The more time and craftsmanship was dedicated to these parts of a sword regarding decoration of exceptional arms. Undoubtedly, the sword that is the hero of our story is such an exceptional weapon. Let´s wait for the next part of our narration…

Pic. No. 3 – Found condition of the blade. Photo archive of the Municipal Museum in Celakovice.

Pic. No. 4 – An X-ray image of a part of the blade, part 1. Laboratory of Restoration-Conservation, Academy of Sciences of the Czech Republic. Institute of Archaeology, Prague.

Pic. No. 5 -  An X-ray image of a part of the blade, part 2. Laboratory of Restoration-Conservation, Academy of Sciences of the Czech Republic. Institute of Archaeology, Prague.

Pic. No.6 – A cut through a blade of the same construction, black: hard steel, light: soft iron. http://templ.net/pics-making/blades/cross_section01v.jpg. Corrected. 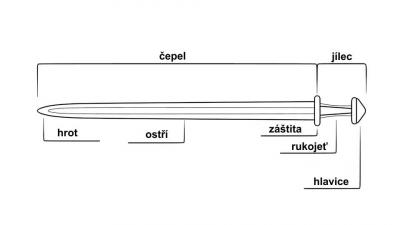 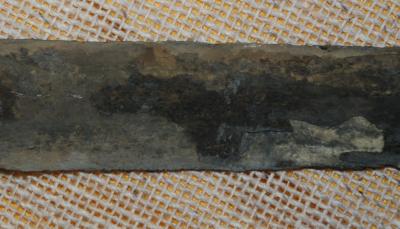 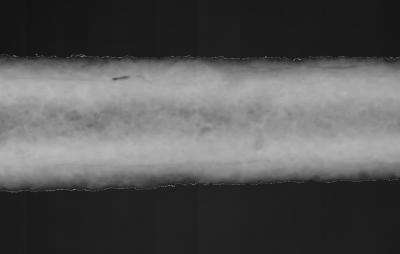 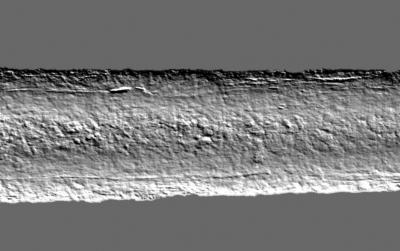